On November 14, 2018, Sun Metals Corp. announced the intersection of 100 meters grading 4.99% Copper equivalent and with 3.03 grams per tonne (g/t) Gold, 2.51% Copper and 52.5 g/t Silver on the Stardust Property owned by Lorraine Copper Corp. and optioned by Sun Metals.  On December 20, 2018, Sun Metals announced the completion of a non-brokered private placement of CAD$5,162,500 with the intention to use the proceeds to continue its exploration of the Stardust Property.  As a part of this private placement, Teck Resources Limited (NYSE: TECK.B) invested a total of CAD$3,500,000 for a 13.8% equity stake in Sun Metals.  More recently, and on February 4, 2019,Sun Metals announced an arrangement agreement with Lorraine Copper Corp. providing for the indirect merger of the companies.

The Honourable Bill Bennett, Surge director and three-time former BC Energy & Mines Minister comments “The Omineca Region of the Province has already generated several promising projects, and our approximate 200 km2land package is strategically situated to exploit the high copper-gold values of the region. BC is a mining-friendly jurisdiction with reasonable processes, good infrastructure and potential First Nation partners.”

Surge Exploration’s Omineca Group of 9 claim blocks (see map) lie in the Omineca Mining Division of north-central British Columbia, approximately 150 km north of Fort St. James.  The claims are not subject to any royalty terms, back-in rights, payments or any other agreements and encumbrances.

Management plans to prepare and announce a plan and budget for an exploration program to be carried out once the field season starts in mid-2019. 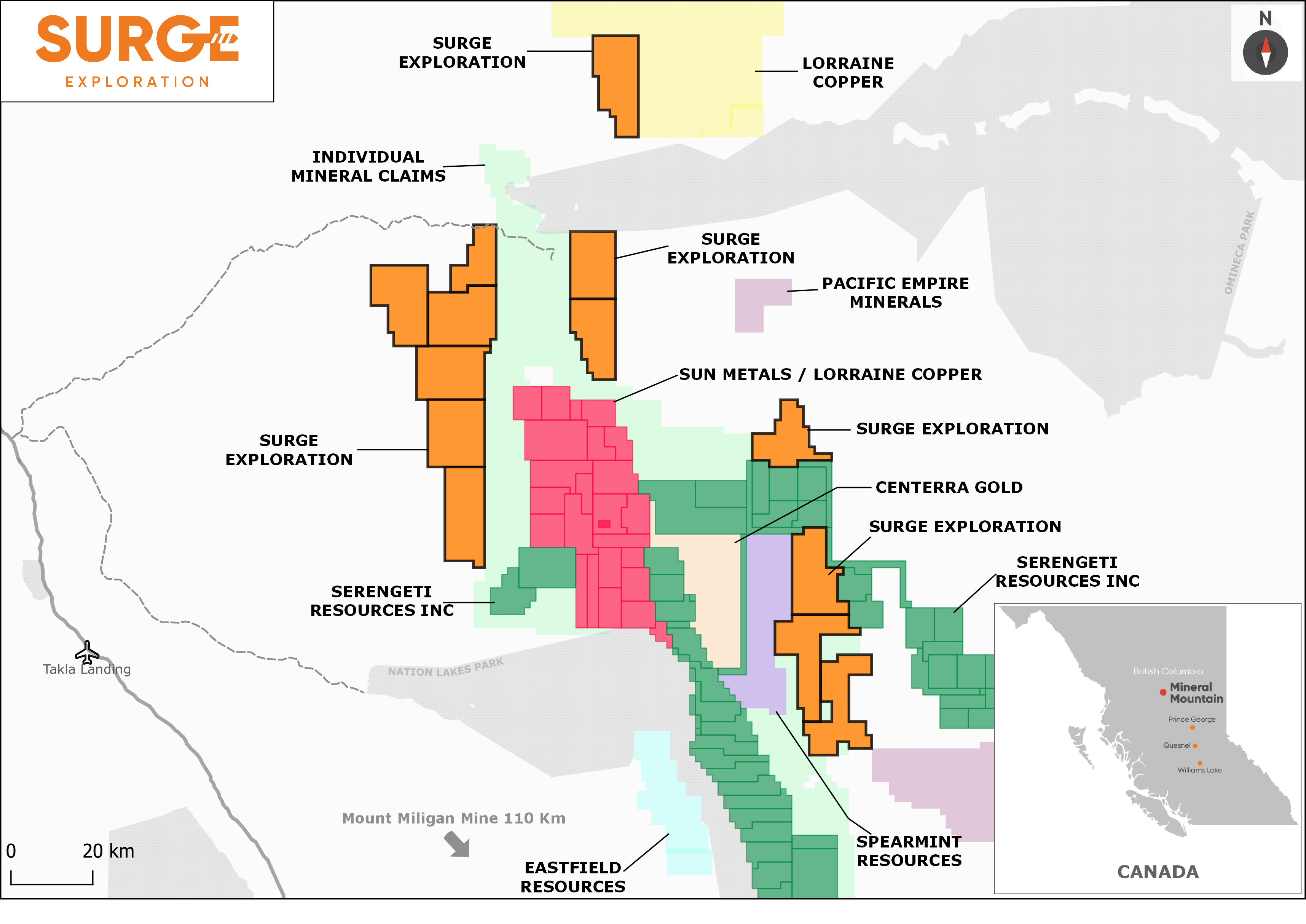 On the Glencore-Bucke Property, drill holes GB18-22 to GB18-30 tested the Northwest and Main Zones with the intent of intersecting mineralized zones along strike and vertically above and below previous intersections reported in the 2017 drilling program completed by LiCo Energy Metals.

The results for diamond drill holes GB18-23 to GB18-30are summarized below in Tables 1 and 2. There were no significant results for drill hole GB18-22. 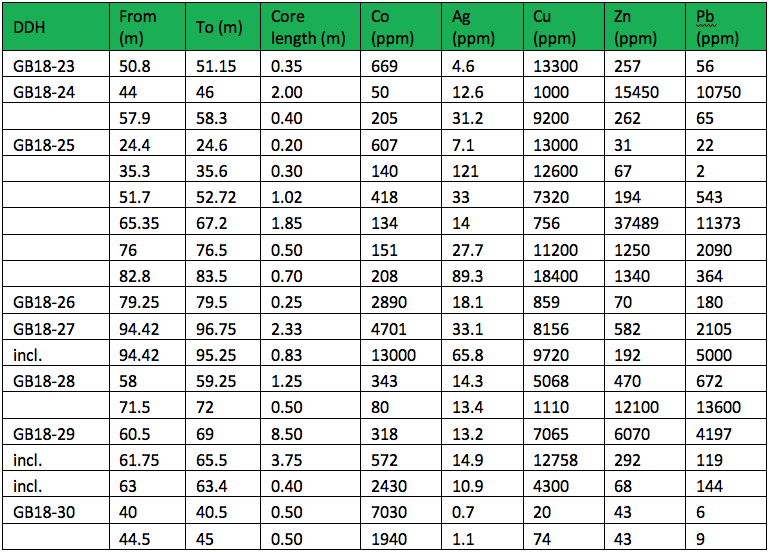 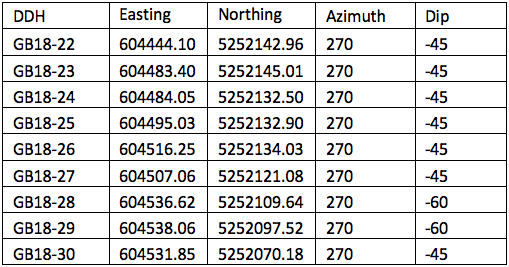 Surge Exploration Inc. has implemented a quality assurance/quality control (QA/QC) program for both the Glencore-Bucke and Teledyne Property drill programs.

Diamond drill cores were logged, and where marked for sampling, split in half, with one half placed in a labelled sample bag, and the remaining half placed back into the core tray and stored in a secured compound. A blank and a standard were inserted in the assay sampling sequence at every 26thand 27thplace respectively.  All samples were shipped to Activation Laboratories in Ancaster, Ontario. Each sample was coarsely crushed and a 250 g aliquot is then pulverized and made ready for analysis. A 0.25g portion of the pulverised material is digested with a near total digestion (4 acid) and then analyzed using an ICP. QC for the digestion is 14% for each batch, 5 method reagent blanks, 10 in‐house controls, 10 samples duplicates, and 8 certified reference materials. An additional 13% QC is performed as part of the instrumental analysis to ensure quality in the areas of instrumental drift. If over limits for Cu, Pb, Zn, and Co are encountered, a sodium peroxide fusion, acid dissolution followed by ICP‐OES is completed. Where Ag over limits, a four‐acid digestion is completed followed by ICP‐OES.

The technical content of this news release has been reviewed and approved by Joerg Kleinboeck, P.Geo., an independent consulting geologist and a qualified person as defined in NI 43-101.

The area of interest hosts several other mining companies and is situated near the mylonitic corridor that is part of the Atacama Fault System that hosts many of the IOCG deposits in northern Chile. The Atacama Cobalto Project corresponds to a “cobalt anomalous IOCG” associated with the geographic area.

The Company has an option to earn an undivided 60% interest in the Glencore Bucke Property and the Teledyne Cobalt Property, located in Cobalt, Ontario Canada.

The property is located on the northernmost section of the Incahuasi salar, 75 km southeast from both the town of Tilomonte, Chile and the Salar de Atacama, where mining is the largest economic activity,and the mining industry is one of the region’s major employers.  The Incahuasi salar is located on the national border between Chile and Argentina at an elevation of 3,260 m.  The Incahuasi Lithium Project consists of 10 mineral exploration concessions totalling 2,300 hectares.  Bordering this property, in Argentina, is a 9,843 hectare lithium exploration property held by Advantage Lithium (TSXV: AAL OTCQB: AVLIF).  The option on this project is subject to TSX-V approval.

As announced on November 28, 2018, Surge has acquired a 100% interest in9 claim blocks comprising 19,665 hectares (197 sq km)in the Omineca region of north-central British Columbia, approximately 150 km north of Fort St. James.  The claims are not subject to any royalty terms, back-in rights, payments or any other agreements and encumbrances.  The region is host to numerous operating mines, good infrastructure including experienced exploration and supporting services.

Previous Post
Surge Reports Initial Results On It’s 2018 Ontario Cobalt Exploration Program
Next Post
Surge Exploration Announces CFO Change
Menu
We use cookies on our website to give you the most relevant experience by remembering your preferences and repeat visits. By clicking “Accept”, you consent to the use of ALL the cookies.
Cookie settingsACCEPT
Manage consent