Vancouver, BC – October 31, 2018 – Surge Exploration Inc. (the “Company” or “Surge”) (TSX‐V:SUR, OTCQB:SURJF, FRA:DJ5C) is pleased to announce that it’s wholly owned subsidiary, Surge Exploration Chile SpA has entered into an arm’s length non-binding Memorandum of Understanding (the “MOU”) with Mr. Miguel Angel Pérez Vargas ( “MAPV”) for  an  option to acquire up to 100% of the Incahuasi Lithium Project in the prolific Antofagasta mining region in Northern Chile. The Incahuasi Lithium Project comprises 10 exploration concessions totalling 2,300 hectares, and the Incahuasi Salar is located on the Chile/Argentina national border approximately 75 km / 46 mi southeast from the famed Atacama Salar in Chile.  The Atacama Salar is well-known to be the world’s largest and actively mined source of lithium with over 15% of the global supply of lithium contained within its boundaries. 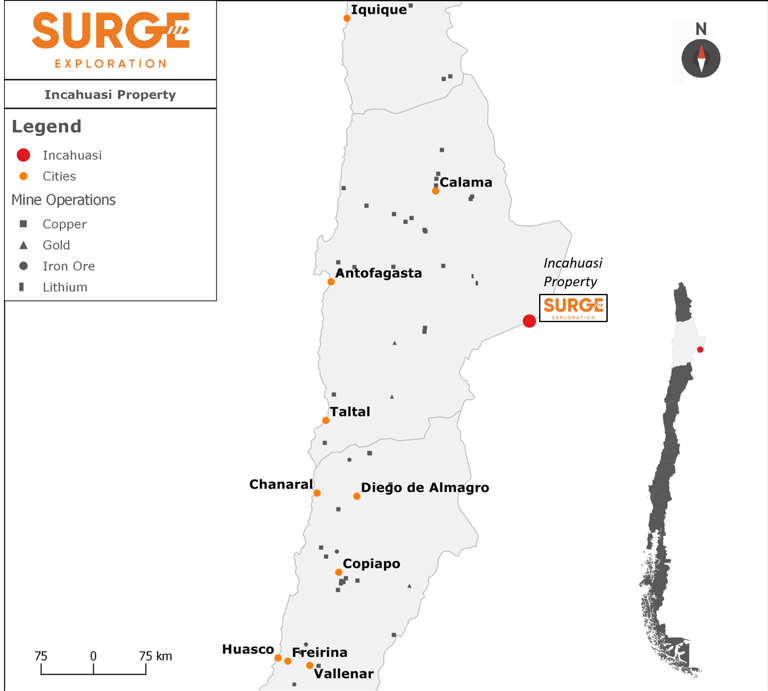 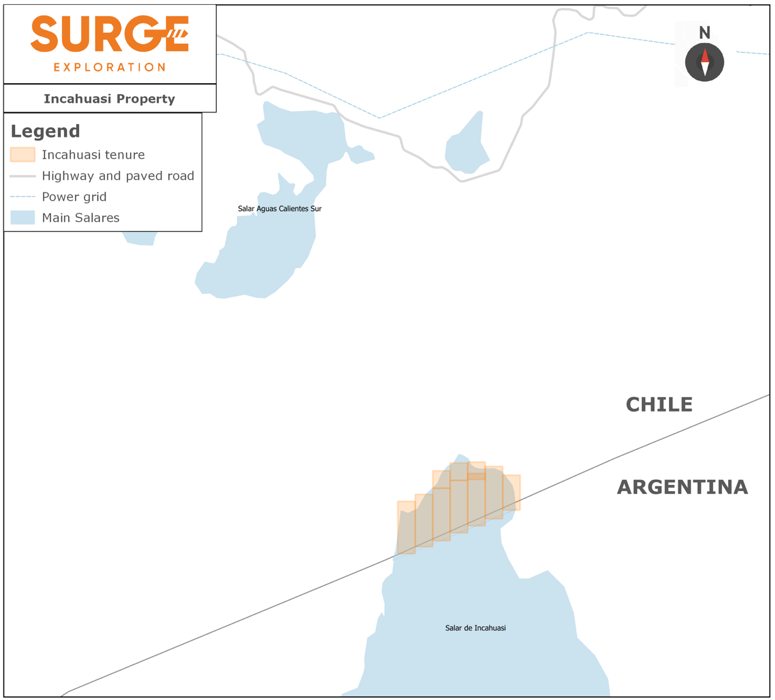 The MOU, when superseded by a definitive option agreement (the “Agreement”), will require Surge to make certain cash and common share payments totalling USD$2.22 million and making certain work and development commitments during the term of the option agreement.

The Incahuasi Lithium Project exhibits many highly desirable and key acquisition attributes, including:

The Company intends to undertake a preliminary resource definition program upon receipt of the National Instrument 43-101 report, which is expected to be completed in 2019.

“We are excited about the opportunity to earn a significant interest in a lithium concession located in the Lithium Triangle, the world’s most prolific lithium producing region with over 70% of the world’s lithium reserves. We look forward to develop this concession, for the benefit of all our shareholders.” says Tim Fernback, Surge’s President & CEO.

Structure of the MOU and subsequent Agreement:

The proposed transaction to acquire 100% of the mining rights associate with the Incahuasi Lithium Project shall be effected by payment of the amounts described below:

Once Surge has completed the foregoing conditions, the Company must also have completed the following work commitment in order to exercise the option and acquire 100% interest in the Incahuasi Lithium Project.

Surge shall be required to complete the following under its “Work Commitment” obligations with the exploration phase starting immediately after the conclusion of the Option Agreement, with the assurance that Surge produces a geophysical survey and at least one drill hole completed within 24 months from the Effective Date (the “Exploration Program”).

Once Surge completes all the prerequisites of the Agreement, and therefore owns the rights to the lithium mineral claims, MAPV shall receive a 2% NSR in the Incahuasi Lithium Project.  Surge will retain the right to repurchase 50% of the NSR to MAPV at a price of USD$3,500,000.

The transaction will be subject to TSX-Venture approval. Finders fees are payable in connection with the sourcing and negotiation of the potential acquisition of the Incahuasi Lithium Project.

Qualified Person: The technical content of this news release has been reviewed and approved by Thomas Eggers.  Mr. Eggers is a non-independent Qualified Person within the meaning of National Instrument 43-101 Standards, as a Registered Member of the Chilean Mining Commission.

The property is located on the northernmost section of the Incahuasi salar, 75 km southeast from both the town of Tilomonte, Chile and the Salar de Atacama, where mining is the largest economic activity, and the mining industry is one of the region’s major employers.  The Incahuasi salar is located on the national border between Chile and Argentina at an elevation of 3,260 m.  The Incahuasi Lithium Project consists of 10 mineral exploration concessions totalling 2,300 hectares with the adjoining 9,843 hectare property located directly over the national border in Argentina is held by Advantage Lithium (TSX-V: AAL OTCQB:AVLIF).

The Company has an option to earn an undivided 60% interest in the Glencore Bucke Property and the Teledyne Property, located in Cobalt Ontario.

Previous Post
EXPLORATION UPDATE – 2018 Phase II Drilling Program; Glencore Bucke Property
Next Post
Surge Exploration and CAP Mineria Boards Approve the Option Agreement on the Chilean Atacama Cobalto Project
Menu
We use cookies on our website to give you the most relevant experience by remembering your preferences and repeat visits. By clicking “Accept”, you consent to the use of ALL the cookies.
Cookie settingsACCEPT
Manage consent