“We’re excited at Surge Exploration to acquire approximately 200 sq. km’s (85 sq. mi) of tenures in such a propitious area of BC.” commented the Honourable Bill Bennett, Surge director and three-time former BC Energy & Mines Minister. “This area of the Province has already generated several promising projects, and our land package is strategically situated to exploit the high copper-gold values of the region. BC is a mining-friendly jurisdiction with reasonable processes, good infrastructure and potential First Nation partners – extending Surge’s land holdings from Chile and Ontario to this region of BC makes our company stronger.”

The Omineca Group of 9 claim blocks (see map) lie in the Omineca Mining Division of north-central British Columbia, approximately 150 km north of Fort St. James.  The claims are not subject to any royalty terms, back-in rights, payments or any other agreements and encumbrances.

Once a detailed compilation of all available data has been collected and assessed, management will prepare a plan and budget for an exploration program to be carried out once the field season starts in 2019. 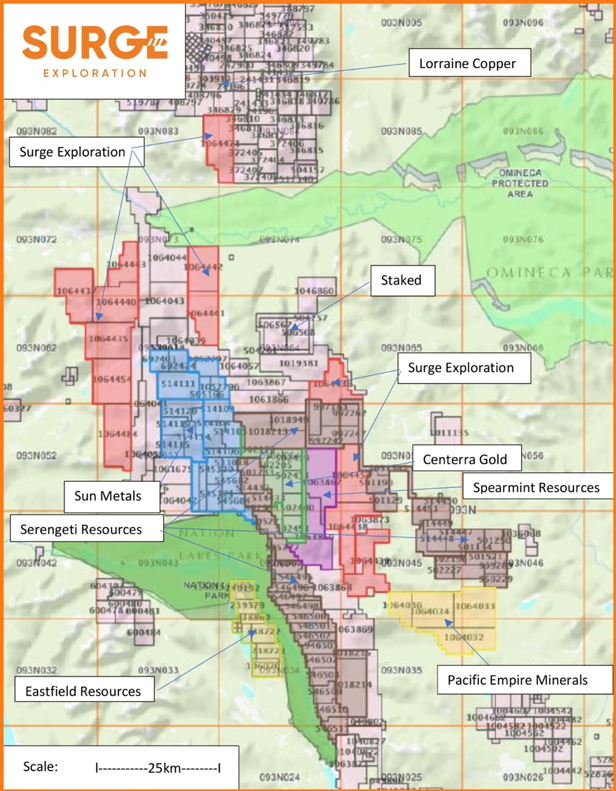 The Company will pay Venture Capital IQ Inc. $40,000 upon signing the Agreement and issue 1,000,000 fully paid and non-assessable common shares in the capital of Surge upon Exchange approval.

All shares issued are subject to a four month and a day hold period in accordance with applicable securities laws.

The technical content of this news release and the 43-101 technical reports have been reviewed and approved by Paul Sorbara, P.Geo., an independent consulting geologist and a qualified person as defined in NI 43-101.

The property is located on the northernmost section of the Incahuasi salar, 75 km southeast from both the town of Tilomonte, Chile and the Salar de Atacama, where mining is the largest economic activity, and the mining industry is one of the region’s major employers.  The Incahuasi salar is located on the national border between Chile and Argentina at an elevation of 3,260 m.  The Incahuasi Lithium Project consists of 10 mineral exploration concessions totalling 2,300 hectares.  Bordering this property, in Argentina, is a 9,843 hectare lithium exploration property held by Advantage Lithium (TSXV: AAL OTCQB: AVLIF).  The option on this project is subject to TSXV approval.

The area of interest hosts several other mining companies and is situated near the mylonitic corridor that is part of the Atacama Fault System that hosts many of the IOCG deposits in northern Chile. The Atacama Cobalto Project corresponds to a “cobalt anomalous IOCG” associated with the geographic area. The Atacama Cobalto Project benefits from access to excellent infrastructure, including port access, energy supply, and access through the Pan American Highway. The option on this project is subject to TSXV approval.