Vancouver, BC – Sept 17, 2019 –Surge Exploration Inc. (the “Company“or “Surge”) (TSXV: SUR, OTC: SURJF, FRA: DJ5C) is pleased to report on progress being made at the Hedgehog project located near the historic gold mining community of Barkerville in east central British Columbia.

In 2018, Surge collected 843 soil samples at the Hedgehog project from which anomalous results are being evaluated in the 2019 exploration program. A trenching and excavator pitting program was completed in August 2019, central to the overall exploration objective in the region. Twenty-nine (29) excavations were completed using a large excavator with twenty-five (25) successfully reaching bedrock allowing sampling. Samples have now been submitted to the assay lab and results are expected by late September 2019. Two targets are being explored in this project which is prospective for both Cyprus style massive copper-gold-silver-cobalt mineralization and Barkerville Gold Mines style gold mineralization (see Surge News Release dated July 31, 2019).

The largest exploration program in the vicinity of the Hedgehog project is being conducted by Barkerville Gold Mines Ltd.(TSX-V:BGM) (“BGM”) which controls a very large claim block extending in a northwest-southeast direction for approximately 75 kilometers. The southern boundary of the Hedgehog project extends to within 500 meters of the BGM lands and is located approximately 10 kilometres to the north of the historic Barkerville mines. On July 11, 2019, BGM published a revised mineral resource estimate of 13.5 million tonnes grading 5.6 g/t Au containing 2.44 million ounces gold in the combined and measured category and 11.9 million tonnes grading 5.0 g/t gold containing 1.92 million ounces gold in the inferred category (Ni-43-101 report authored by Christine Beausoleil P.Geo, filed by BGM on Sedar on July 11, 2019). Drilling on the BGM lands totals approximately 400,000 meters in more than 3,400 drill holes and continues with multiple drill rigs in operation.  It should be noted that mineralization hosted on adjacent and/or nearby properties is not necessarily indicative of mineralization hosted on the Company’s properties.

Mr. Tim Fernback, Surge President & CEO states “We are very happy with the progress on the 2019 Hedgehog exploration program to date, with it going as planned by our exploration team.  The area surrounding Hedgehog is home to quite a bit of historic and current gold mining activity, and we are excited to see the assay results from the program as we continue to develop this project.” 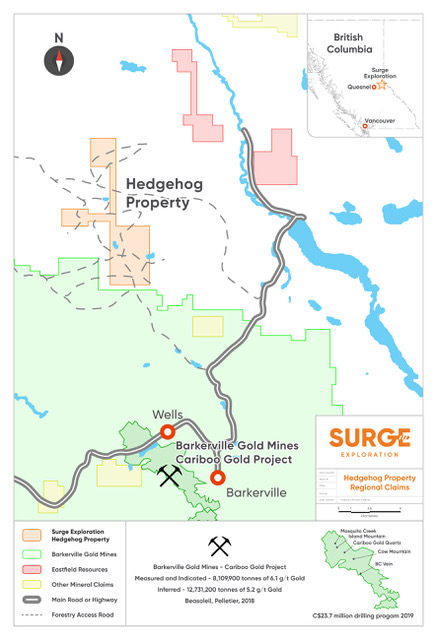 The Hedgehog project is subject to an option agreement whereby the Company may earn a 60% interest in the project by making payments (cash and or shares) totalling $500,000 and completing work commitments totalling $2,500,000 over a five-year term.

J.W. (Bill) Morton P.Geo, a qualified person within the context of NI-43-101, has prepared and takes responsibility for this news release.

The Company owns 100% interest in the Golden Triangle – Trapper Lake Group of 23 mineral claims which are located in the prolific Golden Triangle Region of northwestern British Columbia approximately 90 km ENE from Juneau, Alaska.   Surges’ staking program totals an area of approximately 325 sq. km within the regionally important geological and structural trend. A large portion of the new property is adjacent to the Thorn Project owned by Brixton Metal’s Corp. (“Brixton”, TSXV: BBB) with the balance covering prospective open ground containing numerous B.C. Minfile showings with Cu, Ag, Au values adjoining the boundaries of the Golden Bear Mine, a 480,000 oz Au past producer.

In Brixton’s news release dated July 15, 2019 (Brixton News Release), they reported results from drill hole THN19-150, which was drilled to 829.06 metres depth at the Oban diatreme breccia pipe within the Camp Creek copper corridor.  Brixton reported a drill hole intercept of 1.97 grams per tonne gold equivalent across 554.70 meters including 135.96M of 1.35 g/t Au, 0.31% Cu, 133.62 g/t Ag or 5.00 g/t Aueq including 6M of 3.56% Cu, 3.37 g/t Au, 257.77 g/t Ag.    Structural mapping and soil-rock geochemistry at the Chivas zone and relogging of select core from the Glenfiddich zone were also conducted as part of the overall exploration program at the Thorn Project.   Of note, mineralization hosted on adjacent and/or nearby properties is not necessarily indicative of mineralization hosted on the Company’s properties.

Previous Post
Surge Closes Private Placement
Next Post
Tim Fernback, President and CEO of Surge Exploration Inc. is Featured in an Interview at SmallCapVoice.com
Menu
We use cookies on our website to give you the most relevant experience by remembering your preferences and repeat visits. By clicking “Accept”, you consent to the use of ALL the cookies.
Cookie settingsACCEPT
Manage consent